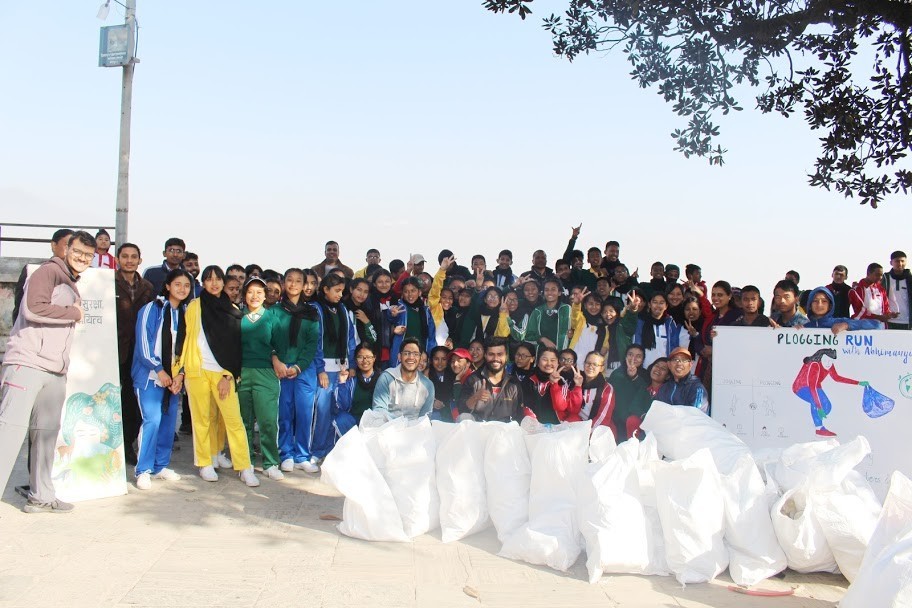 In an effort to continue the efforts in combating plastic pollution and changing people's attitudes towards waste, Doko Recyclers with Creative Academy, a school based in Kirtipur, facilitated a 'Plogging Run' in Kirtipur Heritage Temple Area in the morning of November 26. Plogging is a combination of ‘Jogging’ with ‘Picking Up Litter’ that started as an organized activity in Sweden around 2016 and spread to other countries in 2018, following the growing concern around Plastic Pollution. The activity was a part of an ongoing movement by Abhimanyu Chakravorty, a journalist with the Indian Express, who has travelled across 6 countries, India, Thailand, Laos, Cambodia, Myanmar and Nepal, trying to positively and creatively spread the message about Plastic Pollution. Nepal was the last leg of his journey and like in all other countries, the idea was to collaborate and connect with local stakeholders and interested organizations and individuals to roll out awareness activities, discourses and presentations to understand the local scenario of waste management and to advocate against plastic pollution. We started from the school at 8 am after a brief orientation with the students about the activity and how it was crucial to understanding the devastation caused by poor handling of waste and raising consciousness in the community through practical demonstration. The last point of the run was Bagh Bhairab Temple, where a large dump in the backyard of the temple was cleared and all the waste materials collected were weighed in segregated categories-recyclables and non-recyclables. The participants then returned to the school, where Abhimanyu shared a short presentation and video about his journey across various countries followed with a round of interaction with the students. More than 100 students and teachers participated and managed to clean up around 100 kgs of litter in a matter of an hour and a half. Most of the waste collected was non-recyclables and around 37 kgs of recyclables were recovered with efficient segregation system using separately labeled collection bags, to exhibit the importance of handling waste efficiently through ‘segregation at source’, which has been Doko’s approach and focus from the very beginning. The enthusiasm exhibited by the participants was good enough to send across a strong message to the local community about the seriousness of ignoring litter and irresponsibly dumping waste, and the importance of handling waste properly.